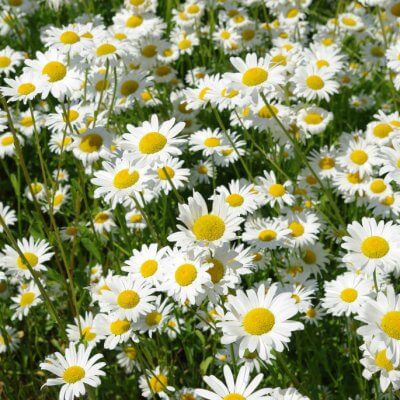 24 May 2018
Chamomile, whose Latin name is 'Chamomillae Romanae', is from the daisy family. It is the most populous family of flowering plants in the world. There are more than 1156 species in Turkey alone. Its homeland is Europe. It has spread from all of Europe to the Caspian shores. Today, it has spread in every geography except Antarctica, which is covered with glaciers. It grows in natural conditions in Marmara, Aegean, Thrace and Southwest Anatolia in our country. It is an annual herbaceous plant that blooms between May and August with white flowers representing elegance.
The leaves have a slightly bitter and spicy flavor. Because it contains rich vitamin C, chamomile leaves are used in world cuisine to enhance both the appearance and taste of salads. Daisies, which honeybees love very much, are the brightest and most striking face of the spring season.

The use of the chamomile plant, which symbolizes purity, innocence and elegance, dates back to ancient times as much as human history. The ancient Egyptians used chamomile flowers in rites of dedication to the gods. In medieval Europe, it was believed that even the plants growing near the daisy gave life to it. For this reason, farmers have always planted May Daisy among the products they grow. Crowns made of daisies are famous in the celebrations of the summer festivals. It is believed that the first daisies of the year bring luck. In the Middle Ages, young boys believed that they would grow quickly by holding bunches of daisies in their hands. Young girls counted the leaves of the chamomile they collected by tearing it off, so they learned whether they were loved or not. Marriage-age girls put a bunch of daisies in front of their eyes and counted them, believing that the number of daisies covering their eyes determines how many years they will get married.

Daisies are a wide variety of flowers with many species and are very similar physically. For this reason, it is essential to collect the right species in the right season, in the right way, by experts for consumption. Because not every daisy species is that innocent.

Chamomile, dried under suitable conditions, has a lifespan of 1 year when stored in a closed glass jar in a dim, cool, and dry environment.